by Zeri
in World News
0

Scottish First Minister Nicola Sturgeon speaks to members of the media outside 10 Downing Street in central London on October 24, 2016 after holding talks with British Prime Minister Theresa May and the first ministers of Wales and Northern Ireland on the government's Brexit plans. Sturgeon, leader of the secessionist Scottish National Party, has been the most vocal of the first ministers since the June 23 vote. Earlier this month she called for a fresh referendum on Scottish independence if Scotland's interests are not protected in the Brexit negotiations. / AFP / DANIEL LEAL-OLIVAS (Photo credit should read DANIEL LEAL-OLIVAS/AFP/Getty Images)

Nicola Sturgeon has hit back at Sadiq Khan over comments he was expected to make about nationalism.

Speaking at the Scottish Labour conference in Perth, the mayor of London was due to call for a fight back against “narrow nationalist parties”.

He tweeted a preview of his speech, which read: “The world is becoming an increasingly turbulent and divided place. We’ve seen Brexit, President Trump elected in the United States and the rise of right-wing populist and narrow nationalist parties around the world.

“It’s up to us — whether in Scotland or in London — to fight this trend.

“The last thing we need now is to pit different parts of our country or sections of our society against each other — or to further fuel division or seek separation.

“The antidote to Brexit and the rise of right-wing populist parties is not to run away, break away or push our neighbours away. It’s to lead in a different direction — the right direction.

“Now is the time to build unity, create a more United Kingdom and ensure everyone has the opportunities they need to succeed.”

The full speech was published in the Daily Record.

However, it later appeared that the speech had been amended so as to clarify that he was not claiming that nationalist were racist. 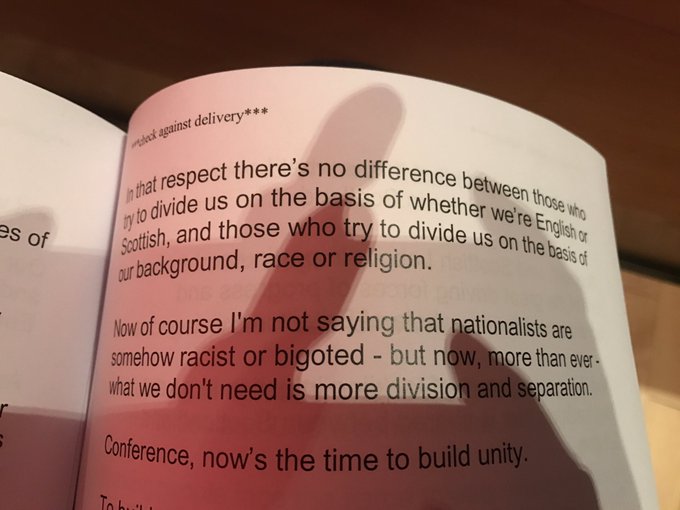 Sadiq Khan has changed his pre-briefed speech text to make clear he does not think nationalists are racists.

Sturgeon tweeted a series of responses…

3/3 and it is a sign of the sheer desperation and moral bankruptcy that has driven so many from Scottish Labour’s ranks. Very disappointing.

Labour in a hole today & – from some of their tweets to me – seem intent on digging it deeper. It’s desperation. We should all rise above it

Some SNP MPs also criticised him…

Spectacularly ill-judged and misleading intervention by @SadiqKhan. Most Scots will know he is wrong, and he probably does too. #ScotLab17

Labour’s view seems to be that every independence or self determination movement that ever was or ever will be must be inherently racist. 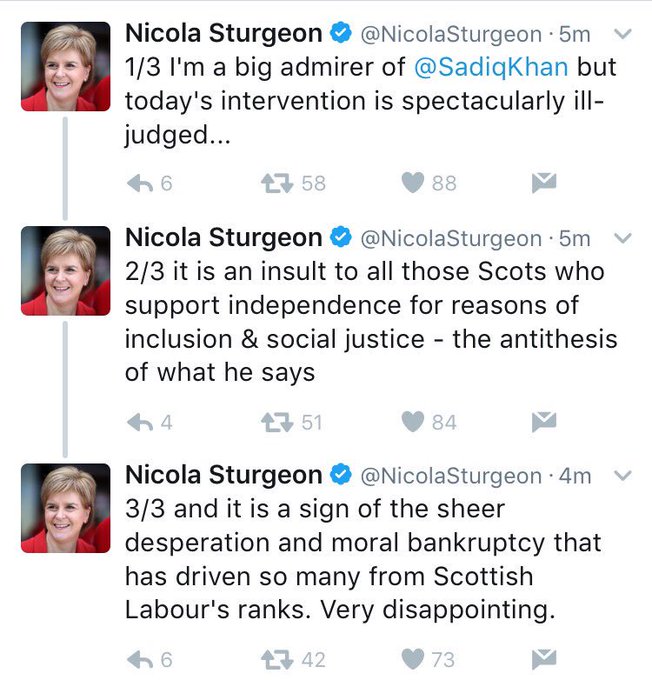 Deplorable from Labour. Disgusted. @SadiqKhan knows what he said is total mince but he’s happy to say it anyway – desperate and shameful.

This is Scottish Nationalism @SadiqKhan
That you try to paint it as racist is shameful.

So Sadiq Khan is calling me & and a lot of my friends “racist” I take exception to that. I for one demand an apology #khanapologise

The Scottish aren’t racist for wanting independence from us. What an idiotic thing to say, Sadiq Khan.

Sadiq Khan has shot himself & the Scots Labour Party in the foot. Some unbelievable comments made. Scots nationalism by no means is racist

A spokesperson for Khan said: “The Mayor has been clear that now’s not the time to play on people’s fears or to pit one part of our country – or one section of our society – against each other.

“Of course the Mayor is not saying that nationalists are somehow racist or bigoted, but now, more than ever- what we don’t need is more division and separation.

“The key point he made to conference today was that now is the time to build unity.”

Khan’s comments came ahead of Scottish Labour leader Kezia Dugdale’s speech to the conference, in which she was expected to pledge her commitment to working for a remain vote if a second Scottish independence referendum were to take place.